‘Well, we’re going to hell for boiling an avocado.’

That was N’s response to the first ever Weekly Watson… and I have to admit I shared his sentiment.  Strange instructions (but decent ingredients) made for a weird recipe.  But, in the name of… er… science (??) we persevered and made this week’s recipe ‘Warm Avocado Veg Patties,’ originally called ‘Persian Avocado Red Bell Pepper White Mushrooms Onion Garlic Vegetable Cake.’  I think our title is a bit more punchy.

So, let’s start with the ingredients I gave Watson: avocado, red bell pepper, white mushrooms, onions, garlic and chicken drumstick.  I was thinking maybe a nice traybake with some spices and and some sort of avocado salsa to go with it… but nope… Watson’s not nearly that boring.  Among the Chinese and Korean Fajitas, there was a Persian Vegetable Cake.  Instant attraction for me–we like Persian food and N’s half Persian so why not go for that one?

What did Watson give me?

That’s all fairly normal stuff–I was ok with all of that.  It was the instructions that slightly baffled me:

Needless to say, the more and more I thought about boiling an avocado in its skin (what???) the sicker it made me feel.  Not one to give up, I decided to amend the cooking instructions to make them (a lot) more attractive.  In all fairness, there is a disclaimer saying Watson eats data and not food, and to exercise judgement.  The guys on The Sporkful tinkered with their Watson recipe, so there’s no reason I couldn’t do that with mine!

So amendments made and ingredients assembled, I got stuck in… 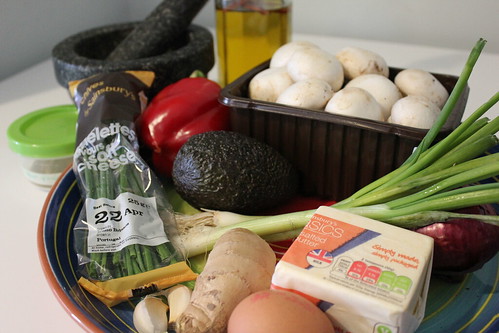 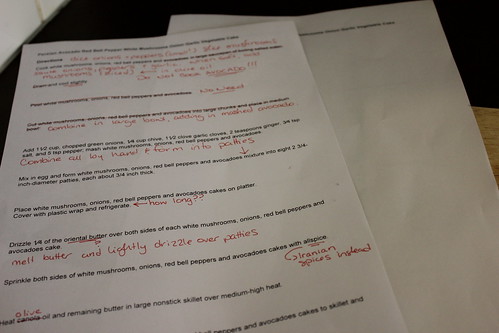 As you can see from my notes, I pretty well changed the entire method of making our avo patties.  Instead of boiling the onion, pepper, mushrooms and avocado, I slow fried the onion, pepper, mushrooms, garlic and ginger with salt and pepper until they were all nice and soft.  After letting them cool, I mashed in the avocado and added a splash of lemon juice to keep the avo from turning brown.  Then came the egg.  Ha.  The egg turned everything into a booger colored, unappetizing mess.  There was no way I was going to be able to form that stuff into patties, let alone be willing to eat it.  I washed my hands and went to the laptop to pull up Papa John’s… 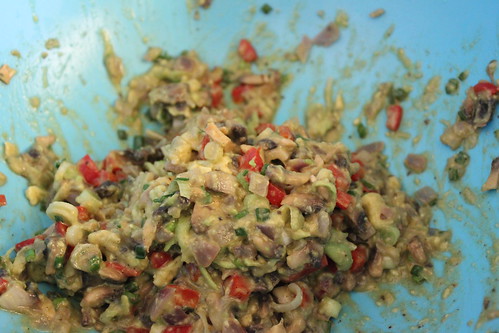 Then I stopped myself… flour!  Surely flour would bind the mixture together!  I wasn’t ready to give up on Watson’s recipe just yet and sprinkled in around two tablespoons of flour.  Sure enough, I was able to make it work and so made a test patty.  I wanted to know ahead of time how horrible it was going to be just in case I needed a back up meal (Papa, I’m lookin’ at you). 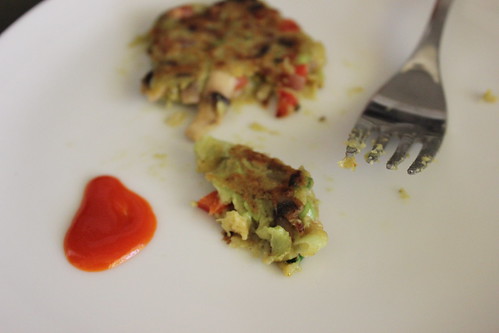 I tried my test patty without any condiments first to get an idea of seasoning and whether it needed more of N’s dad’s Iranian spice mix which I subbed in for the allspice.  To my surprise, it wasn’t horrible!  Added a bit of hot chili sauce and it was even better, but still not quite right.  A nice Thai sweet chili sauce did just the trick!

The real test, and my biggest skeptic, was N.  I made him a test patty and anxiously awaited the criticism and retching that I thought was sure to come.  N’s a foodie, you see, and a bit of a snob when it comes to stuff like this.  He absolutely hated the thought of cooking an avocado.  Miraculously, he deemed it passable and I commenced with frying up our bizarre little batch of veggie cakes. 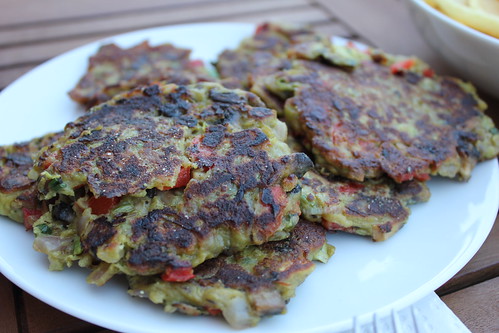 Thoughts:  While our Warm Avocado Veg Patties weren’t disgusting and were perfectly edible, I don’t think we’d do them again anytime in the near future–not without further extensive tweaking!

Tickled by the Weekly Watson?  Suggest some ingredients for next week’s endeavor!

If you’re interested in getting in touch, tweet me at @stephanie_khani or email me at emailthelondondiaries [at] gmail.com!